As mobile phones have evolved, demand for technology that enables simultaneous decoration of the front and back surfaces of handsets emerged.
How did we go about developing double-sided In-mold Decoration technology in an age where single-sided decoration is now commonplace? 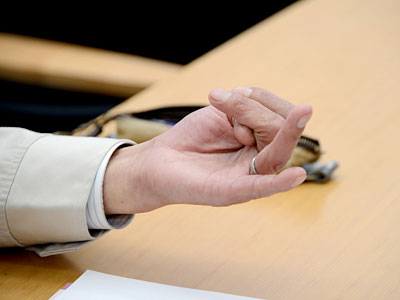 Can you remember when mobile phones first began gaining popularity?
Early models did not have the many functions you find in smartphones today; screens were small and monochrome displays were the norm.
Mobile phone functionality has evolved dramatically since those early days. Screens have become larger and offer better resolution, grayscale segued into color, and cameras have become par for the course.
This evolution in mobile phone features has brought major changes to their appearance, too. Mobile phones are no longer tools for just making calls, they have become information and communication hubs that allow users to check their email, browse the internet and take and view photos.
Finding ways to enhance the brightness of LCD screens thus became a major technological challenge.

Several mobile phone manufacturers approached YOSHIDA TECHNOWORKS regarding the development of technology to enhance the brightness of digital displays. At first, we applied a UV dip to existing products with a view to enhancing screen appearance by depositing an anti-reflection (AR) coating. Dust and other particulate matter adhered to the screens during the initial production run and yields were as low as 10%.
To overcome this problem, Mr. Shimoyama proposed a double-sided In-mold Decoration process of decorating both front and rear surfaces simultaneously.
Though different from the current process, we had applied a double-sided printing technique to the top plate of a prototype cosmetic compact case some thirty years previously. Mr. Shimoyama believed that we could find a way to apply and develop this technology by drawing on this experience.

A succession of failures and a factory floor flood

Double-sided In-mold Decoration technology enables the application of decoration to the front and back surfaces of plastic products simultaneously. Successful application of this technology would make it possible to deposit anti-reflective and UV coatings simultaneously, obviating the need for secondary wrapping, increasing protection against dust and making screens appear brighter.
Unlike single-sided In-mold Decoration, there were several technical hurdles that needed to be overcome, however. The biggest challenge was finding a way to inject the resin between the front and rear in-mold foil. “We failed at this many times over and even flooded the factory floor at one point,” recalls Mr. Shimoyama. Yet there had to be a way to inject the resin successfully. Numerous trials and many failures later, we were successful by injecting resin into a hole made in the reverse side of the in-mold foil.
This proved to be successful and the double-sided In-mold Decoration method was established as a result.

Our technology used in the world’s first camera phones 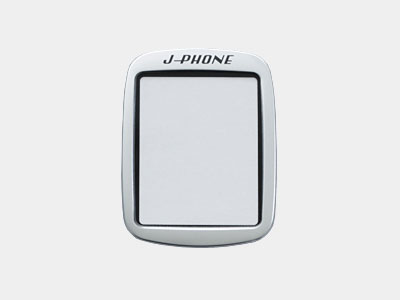