The increasing popularity of smartphones and tablet computers gave rise to a major technological issue: how to attach the glass panels to their plastic covers. Glass Insert Molding with In-mold Decoration – the integral molding of glass and plastic, was developed to meet this challenge. 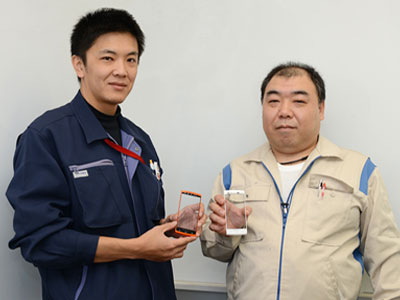 Back in 2005, when smartphones and tablets were less popular than today, Mr. Nakamura – General Manager at the time – proposed the idea of sealed panels, arguing that they would help the products sell. Technological development commenced, but the project was put on hold due to issues with glass breakage. Smartphone and tablet ownership increased rapidly thereafter, however, creating a new surge in demand for such sealed panels.
At that point, the plastic bodies of these products were generally attached to the LCD cover glass using glue or tape. However, because this required a relatively large adhesive surface, LCD screens were reduced in size, resulting in lower visibility.
There was another problem with this method. It left a gap between the body and the glass, allowing dust to enter and affect the clarity of the display.

Mr. Aida and Mr. Otsuka embarked on the development of Glass In-mold technology with the belief that by integrally molding glass that had been placed between molds, it would be possible to produce panels that filled screens without gaps and provided ingress protection. It was an idea that only the in-molding pioneer YOSHIDA TECHNOWORKS could have come up with.
The first challenge we encountered was with the glass, which broke no matter how it was placed into the molds.
But at YOSHIDA TECHNOWORKS, we never give up.
The challenge was worth it, precisely because it was beyond the reach of our rivals. Nothing is impossible, and new technologies are attainable if we persevere and refuse to admit defeat.

Refusal to give up leads to new technology

We solved the problem of glass breakage by using tempered glass, but encountered a new problem with the intensity of the pressure applied when combining plastic with glass.
To solve this, we developed a special adhesive with sufficient strength to resist separation, even on dropping.
And while we encountered different problems with waterproofing and adhesion, Mr. Otsuka used his own tools to create machine tools, which he then used to solve these problems one by one.
“If there’s a problem, think of a new way to solve it,” Mr. Otsuka says lightly, but that process undoubtedly involves hardship and a good deal of trial and error. 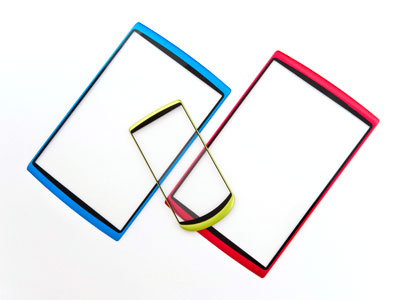 In this way, a new Glass Insert Molding with In-mold Decoration technology that overturned existing industry conventions by integrally molding glass placed between molds came into being over the course of three years. This technology was commercialized for use in smartphones.
The spirit of manufacturing excellence at YOSHIDA TECHNOWORKS drives us to manufacture products that are more beautiful and easier to use, and this is what lead to the development of our Glass Insert Molding with In-mold Decoration technology.
Vol.4